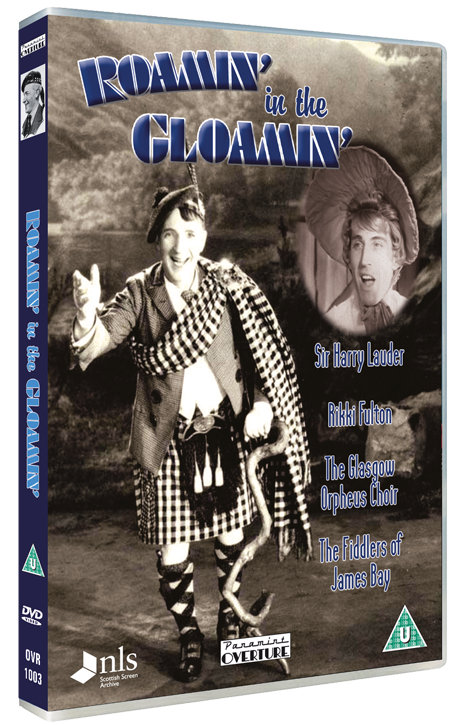 Roamin' in the Gloamin' DVD 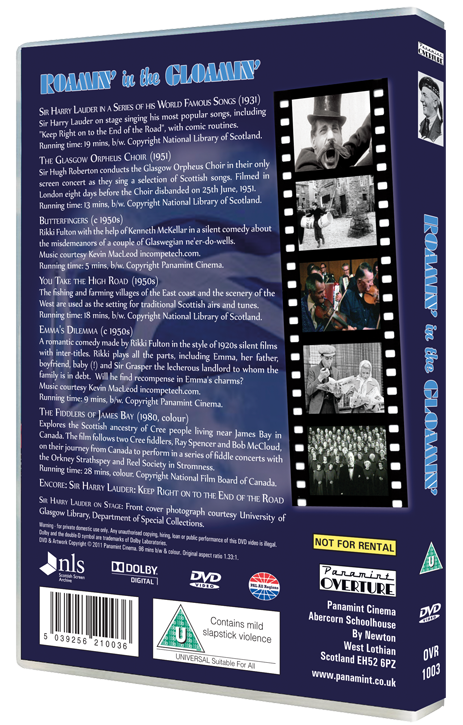 View a video of - Roamin' in the Gloamin' DVD

Sir Harry Lauder in a Series of his World Famous Songs (1931, b/w). Sir Harry Lauder on stage singing several of his most popular songs, including "Keep Right on to the end of the Road", with comic routines.
The Glasgow Orpheus Choir (1951, b/w). Sir Hugh Roberton conducts the Glasgow Orpheus Choir in their first screen concert as they sing various Scottish songs. Filmed in London eight days before the Choir's final broadcast and disbandment on 25th June, 1951.
Butterfingers (c 1950s, b/w). Rikki Fulton with the help of Kenneth McKellar in a silent comedy about the misdemeanors of a couple of Glaswegian ne'er-do-wells.
You Take the High Road (1950s, b/w). The fishing and farming villages of the East coast and the scenery of the West coast are used as a backdrop for traditional Scottish airs and tunes.
Emma's Dilemma (c 1950s, b/w). A romantic comedy made by Rikki Fulton in the style of 1920s silent films with inter-titles. Rikki plays all the parts, including Emma, who is in the family way, her baby, father and boyfriend, and Sir Grasper the lecherous landlord to whom the family is in debt. Will he find recompense?
The Fiddlers of James Bay (1980, colour). From the National Film Board of Canada, this film explores the Scottish ancestry of Cree people living near James Bay in Canada. The film follows two Cree fiddlers, Ray Spencer and Bob McCloud, on their journey from Canada to perform in a series of fiddle concerts with the Orkney Strathspey and Reel Society in Stromness.
Encore: Sir Harry Lauder - Keep Right on to the End of the Road (1931, b/w).